So Happy to be Canadian

This card was inspired by this weeks challenge over at Papertake Weekly.  Since it is getting close to the Queen's Jubilee, and also the Olympics, their idea was to use either your national colours or the colours of the UK.  I thought this works out well since Prince Charles and his wife Camilla just finished a visit to Canada this week, and they even visited my province. For this reason I decided to go with Canadian colours red and white. 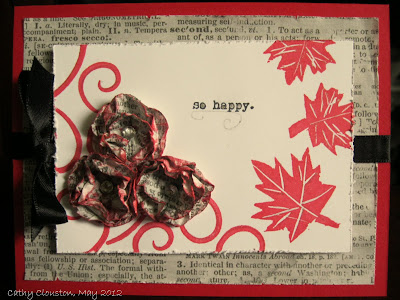 Once I decided on red and white I thought I should probably use a maple leaf image as well, but after searching through my stamps I realized I didn't have one.  And I call myself Canadian!  So I decided to carve my own.  I made three sizes, but only two made it on to this project.  Thats OK, Canada Day is coming soon so I can use the larger one then. 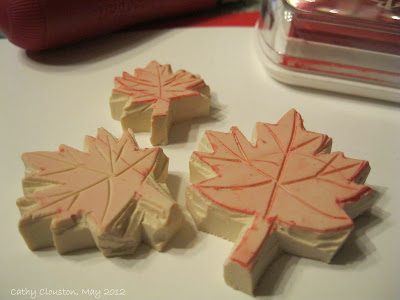 Since my last few cards were birthday cards I decided to make a thank you card this time. I started with a red cardstock base, cut and folded to the A2 size.  I chose some Bazzill dictionary print (which I love!!), and although I usually mat patterns I decided not to for this one as I like the contrast of the gray hue against the red.  I used a distress tool around the edges of the pattern (lightly as the paper is very  thin) and adhered it to the card base.  I added a piece of black ribbon around the middle of the card, making sure the ends were adhered underneath where the main panel would go so that they don't show on the inside of the card.   A second piece of ribbon was tied around the first piece to make the bow.

I decided to make some handmade scrunchy flowers since the thin dictionary paper works so well with this technique. You can read about the first ones I made here.  I used four circles for each flower, and  since I didn't have any jewel brads left I just used simple mini-brads for the flower centers, to which I adhered rhinestones later.  Once put together I sponged the 'petals' with red ink, and sprayed the flowers with red, white, and gold shimmer sprays for sparkle. Adhering the jewels was the last step. 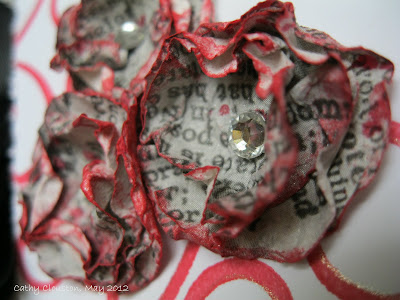 I cut the main focal panel out of white cardstock and stamped a swirly flourish stamp several times on one side.  I stamped three leaves (one medium, two small) on the other side of the panel, turning the stamps each time for interest, and allowing the images to go off the edge.  I chose the sentiment from one of my new My Minds Eye sets, and I thought it worked because it is the same font that is on the dictionary paper.  I chose to stamp it in black to make it stand out from all of the red.  Once the sentiment was added to the center of the panel, I added some Sakura glitter pen to the images, used a distressing tool on all four sides of the panel, and added the flowers with Zots.  The panel was adhered over the ribbon with foam squares.

For the inside of the card I stamped the sentiment on a small piece of white.  The sentiment is actually inside of an oval.  Since the white scrap I used wasn't very big I positioned the stamp so that the sentiment was nestled into the corner and the oval went off the edge of the piece.  Once stamped I added some Sakura glitter pen and distressed the edges with a distressing tool.  I matted the white with more dictionary paper and added this to the inside of the card. 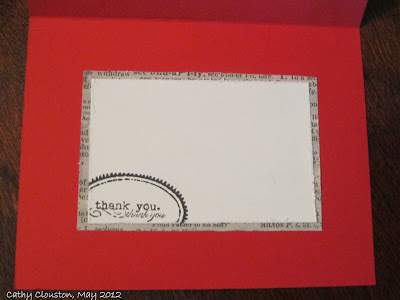 Red and white is not a colour combination I usually turn to, but I'm thinking I should more often.  I also like the idea of keeping things simple by using one bright colour along with black, white, and some neutrals.  This card has given me some ideas for future cards which I am sure you will see soon!  I love how this card turned out, it's patriotic without being obvious about it, and I keep trying to think of someone I need to thank just so I can give it to them!  :)

I would like to enter this card into the following challenges:

I used the following supplies:

Thanks so much for your comments! I read them all and appreciate every word! :)

Cathy Dineen
I like crafts. For many years I was primarily a paper crafter, but I re-caught the knitting bug a couple of years ago and now I'm slightly obsessed. Ok, more than slightly. :)